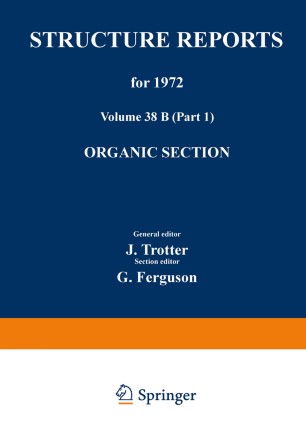 In the past the aim of Structure Reports has been to present critical reports on all work of crystallographic structural interest, whether it is derived directly from X-ray, electron, or neutron diffraction, or even indirectly from other experiments. The reports were in­ tended to be critical and not mere abstracts, except in some cases when a brief indication of the content of a paper of related interest was included in the form of an abstract. In selecting topics for reporting, the criterion 'of structural interest' was freely interpreted in terms of what was topically interesting. However, the amount of literature covering matters of structural interest became so large that this policy could no longer be followed, and from Volume 28 onwards, critical reports are given only on actual structure deter­ minations. Only in this way was it possible to keep yearly volumes to a fairly uniform and usable size. Starting with Volume 30, Structure Reports is produced in a new format by photo-offset printing from typed manuscript with unjustified lines. At the time when the decision for this change was taken, the cost of setting the manuscript in type was becoming so high as to render the cost of individual subscription prohibitive. At that time automatic typing methods giving justified lines, etc.