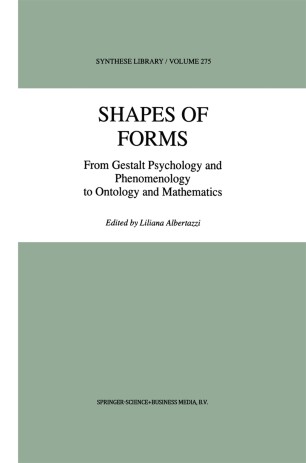 From Gestalt Psychology and Phenomenology to Ontology and Mathematics

impossible triangle, after apprehension of the perceptively given mode of being of that 'object', the visual system assumes that all three sides touch on all three sides, whereas this happens on only one side. In fact, the sides touch only optically, because they are separate in depth. In Meinong's words, Penrose's triangle has been inserted in an 'objective', or in what we would today call a "cognitive schema". Re-examination of the Graz school's theory, as said, sheds light on several problems concerning the theory of perception, and, as Luccio points out in his contribution to this book, it helps to eliminate a number of over-simplistic commonplaces, such as the identification of the cognitivist notion of 'top down' with Wertheimer's 'von oben unten', and of 'bottom up' with his 'von unten nach oben'. In fact, neither Hochberg's and Gregory's 'concept-driven' perception nor Gibson's 'data-driven' perception coincide with the original conception of the Gestalt.