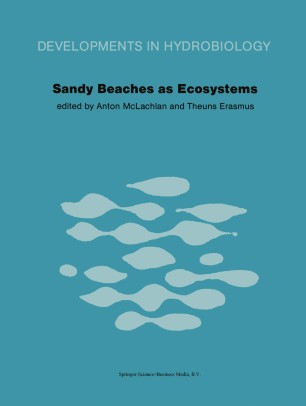 Based on the Proceedings of the First International Symposium on Sandy Beaches, held in Port Elizabeth, South Africa, 17–21 January 1983

Part of the Developments in Hydrobiology book series (DIHY, volume 19)

What sight is more beautiful than a high-energy beach facing lines of rolling white breakers? What battleground is more ferocious than where waves and sand meet? What environment could be more exciting to study than this sandy interface between sea and land? And yet how much do we know about sandy beaches? Open sandy beaches are amongst the most neglected fields of scientific study in the coastal environment. This situation exists despite their great extent along most temperate and tropical coastlines and their value as recreational areas and buffer zones against the sea. The traditional oceanographer does not venture into the surf zone while the terrestrial ecologist stops short at the high water mark. Only a few coastal engineers have grappled with the problem of sand and sediment movement as it influences their construction of harbours and pipelines. The marine biologist on the other hand has regarded estuaries, coral reefs and rocky shores, obviously teeming with life, as more fruitful areas for study than the apparently poor animal life on sandy beaches. Sandy beaches have therefore tended to become a scientific no man's land. Over the last decade this situation has begun to improve. Recent work on high-energy beaches has revealed that they may in fact be rich and productive and fertile areas for study. It has even been suggested that beaches and their adjacent surf zones may constitute viable marine ecosystems.