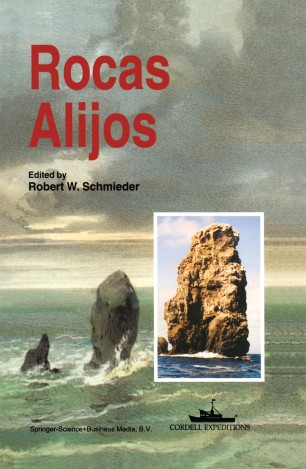 Scientific Results from the Cordell Expeditions

Rocas Alijos lies 180 nautical miles west of Baja California. It comprises several exposed rocks that surmount a large oceanic volcano rising from the ocean floor well off the continental shelf. It is located at the transition zone between two major biologic provinces, at a latitude where the Pacific Current turns westward to form the north Pacific trans-oceanic current. In spite of its obvious importance for biogeographical studies, the remoteness of Rocas Alijos and its small size thwarted any major scientific work until very recently, and the topography, biota, and oceanographic conditions of the site remained largely unknown. During 1990, and again in 1993, Cordell Expeditions, a nonprofit research organization based in Walnut Creek, California, undertook expeditions to describe the site. A scientific team of 30 was onsite 31 October-7 November 1990, and a scientific team of 12 was onsite 10-15 February 1993. Since most of the Rocas Alijos site is subtidal, much of the examination and specimen collection was done by scuba, although several remote sampling techniques were also used. The exposed rocks were sampled by climbers, and megafauna were observed from shipboard.