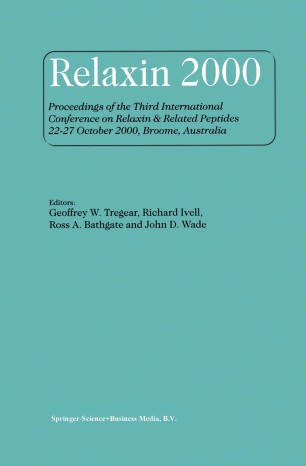 The first international forum on relaxin was a workshop held in Hawaii in 1980. This was followed by the Kroc Foundation conference in Santa Ynes, California in 1981 and then the First International Congress on the Hormone Relaxin in Florence in 1982. After a hiatus of several years, the Second International Congress on the Hormone Relaxin was held in Adelaide in 1994. Since that time, the enormous advances in molecular biology and protein chemistry have led to a stellar growth in relaxin research. Novel sites of action of the hormone have been elucidated, numerous new mammalian primary structures determined, more detailed mechanisms of action postulated, the control of relaxin secretion better understood, non-pregnant roles of the hormone identified, and, importantly, relaxin-related peptides (particularly INSL 3 and 5) identified and possible synergistic actions with relaxin proposed. A raft of novel clinical applications of relaxin has also been explored. Together, these exciting developments made the time ripe for a third international conference. We were therefore delighted to welcome many colleagues, old and new, at Relaxin 2000, the first international forum on relaxin and related peptides in the new Millennium. This conference, which we hope will now be held every four to five years, was held at the Cable Beach Inter-Continental Resort at the delightful old pearling town of Broome in the far north-west of Australia from 22-27 October, 2000.