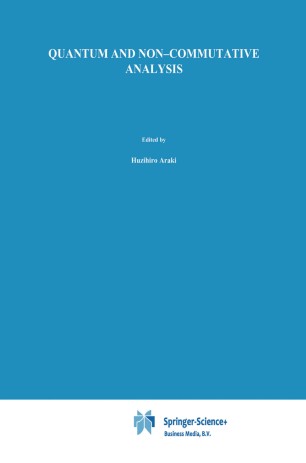 Past, Present and Future Perspectives

In the past decade, there has been a sudden and vigorous development in a number of research areas in mathematics and mathematical physics, such as theory of operator algebras, knot theory, theory of manifolds, infinite dimensional Lie algebras and quantum groups (as a new topics), etc. on the side of mathematics, quantum field theory and statistical mechanics on the side of mathematical physics. The new development is characterized by very strong relations and interactions between different research areas which were hitherto considered as remotely related. Focussing on these new developments in mathematical physics and theory of operator algebras, the International Oji Seminar on Quantum Analysis was held at the Kansai Seminar House, Kyoto, JAPAN during June 25-29, 1992 by a generous sponsorship of the Japan Society for the Promotion of Science and the Fujihara Foundation of Science, as a workshop of relatively small number of (about 50) invited participants. This was followed by an open Symposium at RIMS, described below by its organizer, A. Kishimoto. The Oji Seminar began with two key-note addresses, one by V.F.R. Jones on Spin Models in Knot Theory and von Neumann Algebras and by A. Jaffe on Where Quantum Field Theory Has Led. Subsequently topics such as Subfactors and Sector Theory, Solvable Models of Statistical Mechanics, Quantum Field Theory, Quantum Groups, and Renormalization Group Ap­ proach, are discussed. Towards the end, a panel discussion on Where Should Quantum Analysis Go? was held.