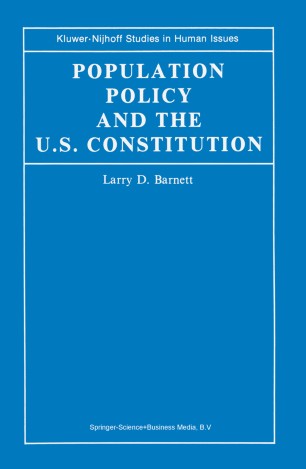 A few decades ago a monograph on the legal aspects of population control would have looked mainly at legal prohibitions. The salient legal problems were restriction of the use of birth control and dissemination of information about it. The assumption in such an approach would have been that effective population control is legally affected only by the clearly stated restrictions in the law. In other respects, the law could be assumed to be neutral. Judicial and legislative changes have eliminated practically all restrictions on the means of contraception. This development, how­ ever, has not freed population from its relation to the law; on the contrary, it has exposed the importance of law as a motivating force for and against population control. Although much applied work in population control is directed toward the distribution of contracep­ tives, concentration on the means of population control has shown itself to be of doubtful value. From many sides the primary impor­ tance of motivation has been recognized, along with the need to influence motivation and to analyze the conditions under which motivational change is possible. At this point the role of the law ix X FOREWORD becomes apparent, along with the recognition that law has not been neutral in this issue-that, in fact, it cannot be neutral. Larry Barnett has undertaken a pioneering effort in identifying the areas of law important to changing people's motivations in regard to population control and to a reduction in individual family size.