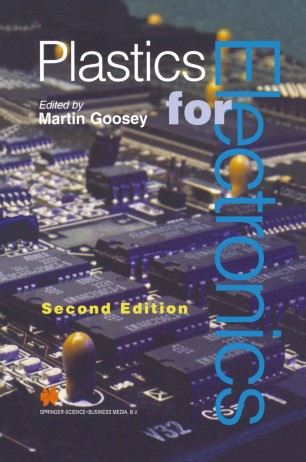 Polymeric materials are widely used during nearly all stages of the manufacturing process of electronics products and this book is intended to give an introductory overview of the chemistry, properties and uses of some of the more important classes of materials likely to be encountered in these applications. It is intended to serve primarily as an introduction to the use of polymers and plastics in the processing and manufacture of electronic and electrical components and assemblies. With no in-depth knowledge of polymers assumed, the book is ideal for engineers and researchers working in areas where electronics and polymer technology overlap. There are also numerous references for those wishing to delve deeper.
The first edition of this book was published in 1985 and since then there has been an unbelievable change and growth in the electronics industry. Much of this has been made possible by the continued development of new and improved polymeric materials. In some areas the polymers used have changed markedly whereas in others there have been continued improvements to the same basic materials. Consequently, this second edition includes new chapters detailing the materials which have emerged more recently. Chapters covering the same topics as the original version have been extensively rewritten and updated, often with the assistance of current international experts. In the last few years much work has been carried out on the development and use of special polymers that have important properties in addition to those normally associated with conventional polymers. This edition therefore includes a chapter that introduces one particular group of materials exhibiting these special properties, the ferroelectric polymers. The book also includes new chapters on high temperature thermoplastics, or engineering plastics as they are sometimes known, and their use in so-called moulded interconnect devices, where the polymer is used to provide a much wider range of functions than has been possible using a more conventional approach.
This new edition also has a wider international coverage with chapters by experts based in Belgium, Holland, Switzerland, Germany, England and the United States of America.