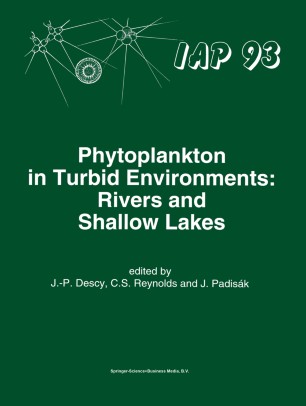 Proceedings of the 9th Workshop of the International Association of Phytoplankton Taxonomy and Ecology (IAP) held in Mont Rigi (Belgium), 10–18 July 1993

Part of the Developments in Hydrobiology book series (DIHY, volume 100)

The ecology of potamoplankton has received less attention than lake plankton. These proceedings produce a synthesis of the composition, community structure and dynamics of lotic phytoplankton, which are intuitively submitted to a strong physical control in the flowing environment, perceived as much more `disturbed' than a lake, even than a well-mixed shallow one. It turns out that the boundary between the phytoplankton of rivers and lakes is not as clear-cut as was thought. In particular, most contributions provide arguments emphasizing the prominent role of physical control in both aquatic systems, especially due to the steep light gradient resulting from turbulent mixing in a turbid water column. Similarities and differences between potamoplankton and limnoplankton, largely based on the information gathered by the contributors are discussed in the introductory paper by Reynolds et al.