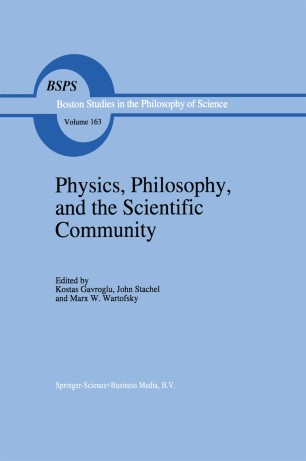 Physics, Philosophy, and the Scientific Community

Essays in the philosophy and history of the natural sciences and mathematics In honor of Robert S. Cohen

Part of the Boston Studies in the Philosophy of Science book series (BSPS, volume 163)

In three volumes, a distinguished group of scholars from a variety of disciplines in the natural and social sciences, the humanities and the arts contribute essays in honor of Robert S. Cohen, on the occasion of his 70th birthday. The range of the essays, as well as their originality, and their critical and historical depth, pay tribute to the extraordinary scope of Professor Cohen's intellectual interests, as a scientist-philosopher and a humanist, and also to his engagement in the world of social and political practice.
The essays presented in Physics, Philosophy, and the Scientific Community (Volume I of Essays in Honor of Robert S. Cohen) focus on philosophical and historical issues in contemporary physics: on the origins and conceptual foundations of quantum mechanics, on the reception and understanding of Bohr's and Einstein's work, on the emergence of quantum electrodynamics, and on some of the sharp philosophical and scientific issues that arise in current scientific practice (e.g. in superconductivity research). In addition, several essays deal with critical issues within the philosophy of science, both historical and contemporary: e.g. with Cartesian notions of mechanism in the philosophy of biology; with the language and logic of science - e.g. with new insights concerning the issue of a `physicalistic' language in the arguments of Neurath, Carnap and Wittgenstein; with the notion of `elementary logic'; and with rational and non-rational elements in the history of science. Two original contributions to the history of mathematics and some studies in the comparative sociology of science round off this outstanding collection.