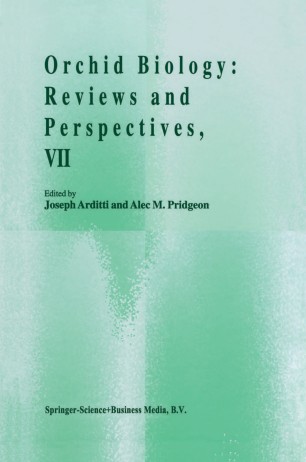 A Personal Note I decided to initiate Orchid Biology: Reviews and Perspectives in about 1972 and (alone or with co-authors) started to write some of the chapters and the appendix for the volume in 1974 during a visit to the Bogor Botanical Gardens in Indonesia. Professor H. C. D. de Wit of Holland was also in Bogor at that time and when we discovered a joint interest in Rumphius he agreed to write a chapter about him. I visited Bangkok on my way home from Bogor and while there spent time with Professor Thavorn Vajrabhaya. He readily agreed to write a chapter. The rest of the chapters were solicited by mail and I had the complete manuscript on my desk in 1975. With that in hand I started to look for a publisher. Most of the publishers I contacted were not interested. Fortunately Mr James Twiggs, at that time editor of Cornell University Press, grew orchids and liked the idea. He decided to publish Orchid Biology: Reviews and Per­ spectives, and volume I saw the light of day in 1977. I did not know if there would be a volume II but collected manuscripts for it anyway. Fortunately volume I did well enough to justify a second book, and the series was born. It is still alive at present - 20 years, seven volumes and three publishers later. I was in the first third of my career when volume I was published.