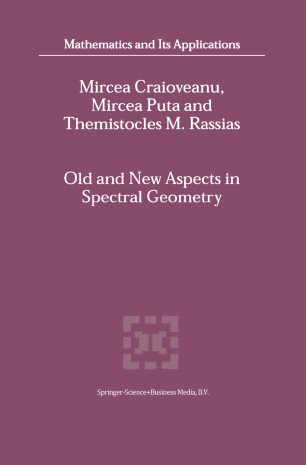 Part of the Mathematics and Its Applications book series (MAIA, volume 534)

It is known that to any Riemannian manifold (M, g ) , with or without boundary, one can associate certain fundamental objects. Among them are the Laplace-Beltrami opera­ tor and the Hodge-de Rham operators, which are natural [that is, they commute with the isometries of (M,g)], elliptic, self-adjoint second order differential operators acting on the space of real valued smooth functions on M and the spaces of smooth differential forms on M, respectively. If M is closed, the spectrum of each such operator is an infinite divergent sequence of real numbers, each eigenvalue being repeated according to its finite multiplicity. Spectral Geometry is concerned with the spectra of these operators, also the extent to which these spectra determine the geometry of (M, g) and the topology of M. This problem has been translated by several authors (most notably M. Kac). into the col­ loquial question "Can one hear the shape of a manifold?" because of its analogy with the wave equation. This terminology was inspired from earlier results of H. Weyl. It is known that the above spectra cannot completely determine either the geometry of (M , g) or the topology of M. For instance, there are examples of pairs of closed Riemannian manifolds with the same spectra corresponding to the Laplace-Beltrami operators, but which differ substantially in their geometry and which are even not homotopically equiva­ lent.