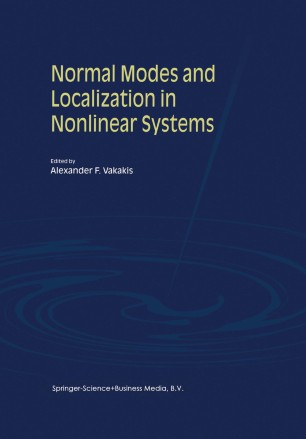 The nonlinear normal modes of a parametrically excited cantilever beam are constructed by directly applying the method of multiple scales to the governing integral-partial differential equation and associated boundary conditions. The effect of the inertia and curvature nonlin­ earities and the parametric excitation on the spatial distribution of the deflection is examined. The results are compared with those obtained by using a single-mode discretization. In the absence of linear viscous and quadratic damping, it is shown that there are nonlinear normal modes, as defined by Rosenberg, even in the presence of a principal parametric excitation. Furthermore, the nonlinear mode shape obtained with the direct approach is compared with that obtained with the discretization approach for some values of the excitation frequency. In the single-mode discretization, the spatial distribution of the deflection is assumed a priori to be given by the linear mode shape ¢n, which is parametrically excited, as Equation (41). Thus, the mode shape is not influenced by the nonlinear curvature and nonlinear damping. On the other hand, in the direct approach, the mode shape is not assumed a priori; the nonlinear effects modify the linear mode shape ¢n. Therefore, in the case of large-amplitude oscillations, the single-mode discretization may yield inaccurate mode shapes. References 1. Vakakis, A. F., Manevitch, L. I., Mikhlin, Y. v., Pilipchuk, V. N., and Zevin A. A., Nonnal Modes and Localization in Nonlinear Systems, Wiley, New York, 1996.