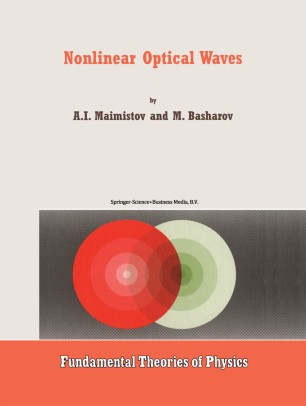 A non-linear wave is one of the fundamental objects of nature. They are inherent to aerodynamics and hydrodynamics, solid state physics and plasma physics, optics and field theory, chemistry reaction kinetics and population dynamics, nuclear physics and gravity. All non-linear waves can be divided into two parts: dispersive waves and dissipative ones. The history of investigation of these waves has been lasting about two centuries. In 1834 J. S. Russell discovered the extraordinary type of waves without the dispersive broadening. In 1965 N. J. Zabusky and M. D. Kruskal found that the Korteweg-de Vries equation has solutions of the solitary wave form. This solitary wave demonstrates the particle-like properties, i. e. , stability under propagation and the elastic interaction under collision of the solitary waves. These waves were named solitons. In succeeding years there has been a great deal of progress in understanding of soliton nature. Now solitons have become the primary components in many important problems of nonlinear wave dynamics. It should be noted that non-linear optics is the field, where all soliton features are exhibited to a great extent. This book had been designed as the tutorial to the theory of non-linear waves in optics. The first version was projected as the book covering all the problems in this field, both analytical and numerical methods, and results as well. However, it became evident in the process of work that this was not a real task.