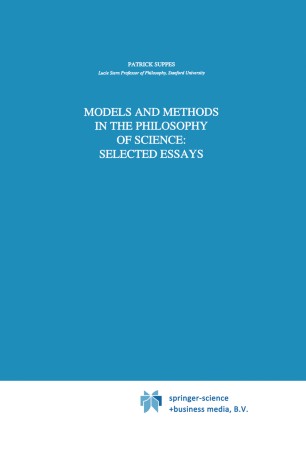 Models and Methods in the Philosophy of Science: Selected Essays

The thirty-one papers collected in this volume represent most of the arti­ cles that I have published in the philosophy of science and related founda­ tional areas of science since 1970. The present volume is a natural succes­ sor to Studies in the Methodology and Foundations of Science, a collection of my articles published in 1969 by Reidel (now a part of Kluwer). The articles are arranged under five main headings. Part I contains six articles on general methodology. The topics range from formal methods to the plurality of science. Part II contains six articles on causality and explanation. The emphasis is almost entirely on probabilistic approaches. Part III contains six articles on probability and measurement. The impor­ tance of representation theorems for both probability and measurement is stressed. Part IV contains five articles on the foundations of physics. The first three articles are concerned with action at a distance and space and time, the last two with quantum mechanics. Part V contains eight articles on the foundations of psychology. This is the longest part and the articles reflect my continuing strong interest in the nature of learning and perception. Within each part the articles are arranged chronologically. I turn now to a more detailed overview of the content. The first article of Part I concerns the role of formal methods in the philosophy of science. Here I discuss what is the new role for formal methods now that the imperialism of logical positivism has disappeared.