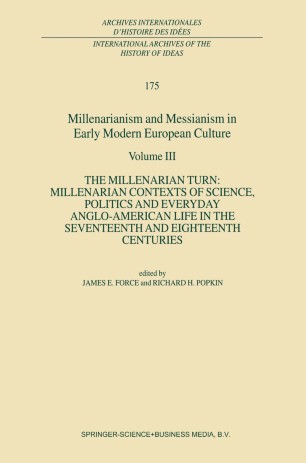 Volume III The Millenarian Turn: Millenarian Contexts of Science, Politics, and Everyday Anglo-American Life in the Seventeenth and Eighteenth Centuries

Thanks to the work of legions of scholars, the millenarian expectations within large segments of the population in Cromwellian England have been carefully examined. The widespread belief that England, with its messianic leader 1 Cromwell, heralded the millennium is well known. Less well examined, perhaps, has been the cultural conceptions of the role of millenarian and messianic ideas in the "long" eighteenth century. Especially during the stable Hanoverian era - until the American and French Revolutions - the common­ place millennial expectations of the English Civil War appeared to recede. By the end of the eighteenth century, with the Napoleonic wars, millenarian views and interpretations underwent a minor renaissance but with nothing like the fervor, it is commonly thought, of the Puritan era when so many believed that the end was near. By the end of the eighteenth century, so the "official" story goes, the religious sceptics and deists of Enlightened England such as David Hume had done too well their work of tarring such religious radicalism with the brush of "enthusiasm. " Happily, this "official" interpretation of the events of the early modern period - in which scholars have too often taken their cue from writers such as Hume and simply ignored millenarian contexts and expectations in the Age of Reason - has undergone a marked shift in the past twenty years.