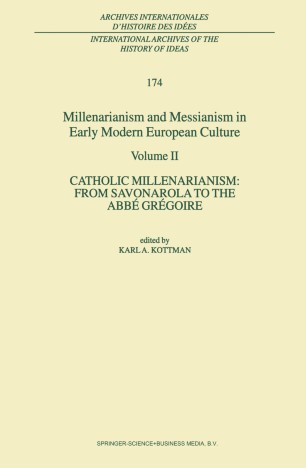 Volume II Catholic Millenarianism: From Savonarola to the Abbé Grégoire

Over three hundred years ago, the paramount modern Catholic exegete, Cornelius a Lapide, S.J., wrote that the 25th of March, 2000, was the most likely date for the world to end. Catholic Millenarianism does not let the day pass without comment.
Catholic Millenarianism offers an authoritative overview of Catholic apocalyptic thought combined with detailed presentations by specialists on nine major Catholic authors, such as Savonarola, Luis de León, and António Vieira. With its companion volumes, Catholic Millenarianism illustrates a hold apocalyptic concerns had on intellectual life, particularly between 1500 and 1900, rivaling and influencing rationalism and skepticism.
Catholics do not ordinarily expect a messianic reign by earthly means. Catholic Millenarianism shows instead what is common to Catholic authors: their preoccupation with the relationship between linguistic prophecies and the events they foretell. This makes the perspectives offered as surprisingly diverse as their particular times, and the book itself interesting and worth repeated reading.