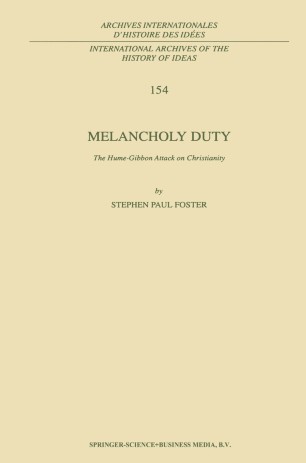 The Hume-Gibbon Attack on Christianity

This book studies the complementary features of the thought of David Hume and Edward Gibbon in the complete range of its confrontation with eighteenth-century Christianity. The ten chapters explore the iconoclasm of these two philosophical historians - Hume as the premier philosopher, Gibbon as the consummate historian - as they labored to `naturalize' the study of Christianity, particularly with attention to its social and political dimensions. No other work deals as comprehensively or thoroughly with the attempt of philosophical history's challenge to Christianity. Belief in miracles and the afterlife, the dimensions of fanaticism and superstition, and the nature of religious persecution were the themes that occupied Hume and Gibbon in the making of their critique of Christianity. This book makes a valuable contribution to scholarship in a number of fields including the history of ideas, religious studies, and philosophy. It will be of interest to philosophers of religion, historians of ideas, eighteenth-century intellectual historians, scholars of the Scottish Enlightenment, and Hume and Gibbon scholars.