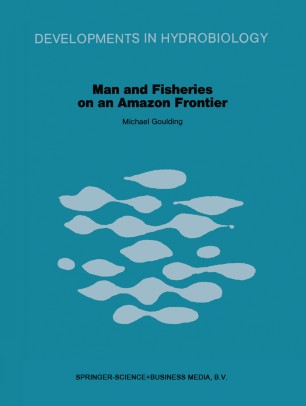 Man and Fisheries on an Amazon Frontier

Part of the Developments in Hydrobiology book series (DIHY, volume 4)

The southwestern Amazon basin, centering on the Territory of Rondönia and the State of Acre, is symbolically if not exactly geographically, the Wild Wild West of Brazil's northern rainforest fron tier. In Brazil the name Rondönia evokes exaggerated images of lawlessness, land feuding, and indigent peasants in search of a homestead. Despite the problems and the perception, the region has pushed ahead, in the view of the govern­ ment, with large-scale deforestation and the establishment of cattle ranches and agricultural farms raising manioc, rice, bananas, and other cash crops. The mining industry has been launched with the exploitation oftin­ stone, and the recent gold rush has attracted thousands of miners that are sifting alluvial deposits along the rivers for the precious ore. In an energy-short world, the region boasts of its large hydroelectric potential waiting development in the rivers falling off the Brazilian Shield and draining into the Rio Madeira. Planners are optimistic that Rondönia's resources, once developed, will more than justify, at least in this corner of the rainforest frontier, the Economic Conquest ofthe Amazon. Sandwiched between the economic take-off and the dream, however, are the biological resources - the plants and animals - that must serve as sources of energy and food until human dominated ecosystems replace naturaiones. These resources are, ofnecessity, being heavily attacked to support the shaky economy of the region, but they are very poorly understood in terms of potential productivity and proper management.