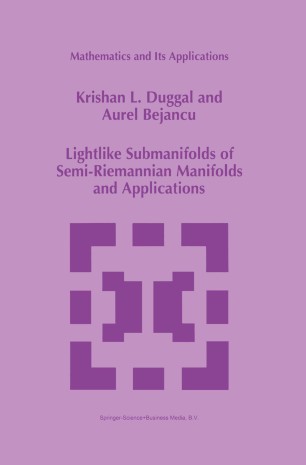 Part of the Mathematics and Its Applications book series (MAIA, volume 364)

This book is about the light like (degenerate) geometry of submanifolds needed to fill a gap in the general theory of submanifolds. The growing importance of light like hypersurfaces in mathematical physics, in particular their extensive use in relativity, and very limited information available on the general theory of lightlike submanifolds, motivated the present authors, in 1990, to do collaborative research on the subject matter of this book. Based on a series of author's papers (Bejancu [3], Bejancu-Duggal [1,3], Dug­ gal [13], Duggal-Bejancu [1,2,3]) and several other researchers, this volume was conceived and developed during the Fall '91 and Fall '94 visits of Bejancu to the University of Windsor, Canada. The primary difference between the lightlike submanifold and that of its non­ degenerate counterpart arises due to the fact that in the first case, the normal vector bundle intersects with the tangent bundle of the submanifold. Thus, one fails to use, in the usual way, the theory of non-degenerate submanifolds (cf. Chen [1]) to define the induced geometric objects (such as linear connection, second fundamental form, Gauss and Weingarten equations) on the light like submanifold. Some work is known on null hypersurfaces and degenerate submanifolds (see an up-to-date list of references on pages 138 and 140 respectively). Our approach, in this book, has the following outstanding features: (a) It is the first-ever attempt of an up-to-date information on null curves, lightlike hypersur­ faces and submanifolds, consistent with the theory of non-degenerate submanifolds.