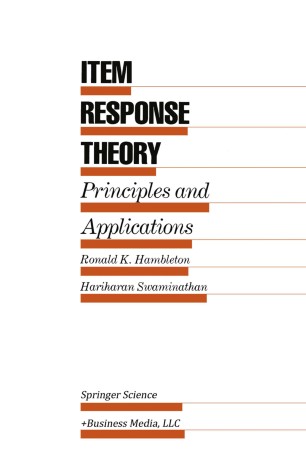 In the decade of the 1970s, item response theory became the dominant topic for study by measurement specialists. But, the genesis of item response theory (IRT) can be traced back to the mid-thirties and early forties. In fact, the term "Item Characteristic Curve," which is one of the main IRT concepts, can be attributed to Ledyard Tucker in 1946. Despite these early research efforts, interest in item response theory lay dormant until the late 1960s and took a backseat to the emerging development of strong true score theory. While true score theory developed rapidly and drew the attention of leading psychometricians, the problems and weaknesses inherent in its formulation began to raise concerns. Such problems as the lack of invariance of item parameters across examinee groups, and the inadequacy of classical test procedures to detect item bias or to provide a sound basis for measurement in "tailored testing," gave rise to a resurgence of interest in item response theory. Impetus for the development of item response theory as we now know it was provided by Frederic M. Lord through his pioneering works (Lord, 1952; 1953a, 1953b). The progress in the fifties was painstakingly slow due to the mathematical complexity of the topic and the nonexistence of computer programs.