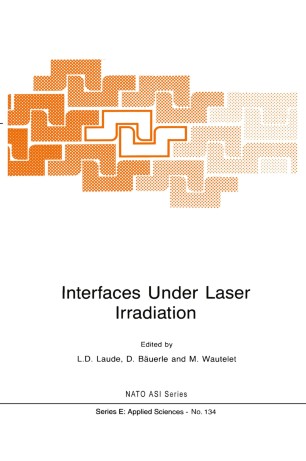 Known and developed over the past twenty five years, lasers have been experimented in a variety of processes with an uneven success. Apart from fundamental physics experiments in which the various aspects of coherence are systematically exploited, applications in the field of Materials Science have been scattered recently over so many situations that it is apparently difficult today to conceive a comprehensive interpretation of all physical processes encountered. In some domains of research like photochemistry, development has been fast and rather self-supporting. In others, like solid-state processing, progress has been either very specific or deviated towards marginal applications, or else emerged as a joint-venture between physicists and chemists. This yielded a number of professional meetings, where day-to-day research activities are presented. In 1982, the Cargese ASI on "Cohesive properties of semiconductors under laser irradiation" was one of such meetings at which a prospective of the field was discussed at length in ebullient round-table sessions. Quoted from the proceedings, "the Institute helped to discern clearly the limits of existing theoretical approaches and the directions along which work is urgently needed within the next few years". Four years have passed and the field has literally explo­ ded. It must be mentioned that some of the most striking developments over the past two years were accurately predicted at the Institute in Cargese.