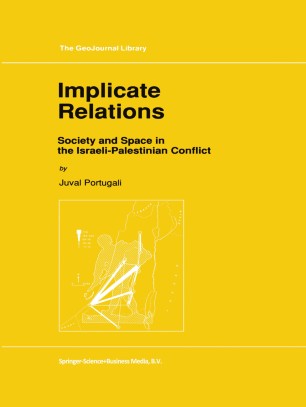 Society and Space in the Israeli-Palestinian Conflict

Part of the The GeoJournal Library book series (GEJL, volume 23)

In his beautiful booklnvisible eities Italo Calvino writes about the two cities ofValdrada, the one which lies on the shores of a lake, and the other which is reflected in the lake and contains not only the exterior of Valdrada on the shores, but also its interior, and probably its inhabitants. "Valdrada's inhabitants know", writes Calvino, "that each of their actions is, at once, that action and its mirror image . . . and this awareness prevents them from succumbing for a single moment to chance and forgetfulness". Such mirror­ image relations are characteristic of the Israeli-Palestinian relations, and the awareness of this property is, to my mind, one of the most dominant experiences in being 'an Israeli. As an Israeli I can testify that Palestinianism is a permanent resident in the personal and collective consciousness of Israelis, and I have good grounds to suppose that Zionism plays a similar role in the personal and collective consciousness of Palestinians. The Israeli-Palestinian conflict is thus not only political, but also very personal, and the account I present below is no exception. It is my personal, and in this respect Israeli, perspective of the conflict between Israelis and Palestinians, with no pretension to a value-free and objective science.