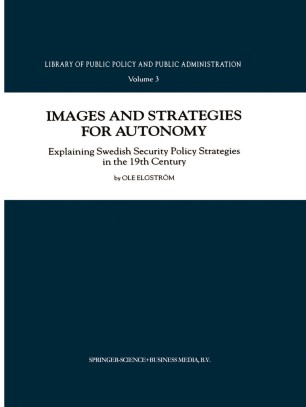 Images and Strategies for Autonomy

How do small states approach their security problems? What types of strategic instruments exist for small states, and when and why are certain strategies chosen rather than others? The security of `weak' states is problematic, demanding trade-offs in the decisions made. Using 19th century Swedish security policy as an example, it is argued here that small states, in their pursuit of security and autonomy, face a dilemma between abandonment and entrapment, leading to a choice between balancing between great powers or making an approach to one of them. This hard choice confronts both non-aligned and allied states.
It is also argued that a focus on the images of decision makers is required as a complement to traditional realist theory in order to gain an in-depth understanding of small state security decisions.
This book is special in its focus on small, non-aligned states. Most studies on balance-of-power behaviour limit their analysis to alignment decisions. The study also expands the domain of image constructs by introducing perceived regime characteristics into the analysis, besides images of power and intentions.
Audience: Scholars and students interested in foreign policy analysis, particularly small-state behaviour. The book points to the importance of beliefs and ideas in security policy.