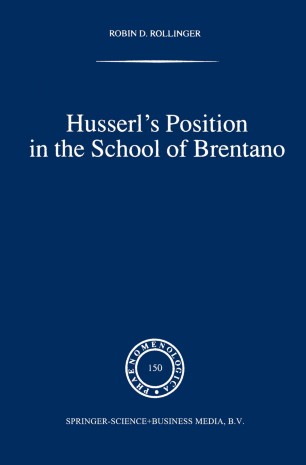 Husserl’s Position in the School of Brentano

Phenomenology, according to Husserl, is meant to be philosophy as rigorous science. It was Franz Brentano who inspired him to pursue the ideal of scientific philosophy. Though Husserl began his philosophical career as an orthodox disciple of Brentano, he eventually began to have doubts about this orientation. The Logische Unterschungen is the result of such doubts. Especially after the publication of that work, he became increasingly convinced that, in the interests of scientific philosophy, he had to go in a direction which diverged from Brentano and other members of this school (`Brentanists') who believed in the same ideal. An attempt is made here to ascertain Husserl's philosophical relation to Brentano and certain other Brentanists (Carl Stumpf, Benno Kerry, Kasimir Twardowski, Alexius Meinong, and Anton Marty). The crucial turning point in the development of these relations is to be found in the essay which Husserl wrote in 1894 (particularly in response to Twardowski) under the title `Intentional Objects' (which is translated as an appendix in this volume).
This study will be of interest to historians of philosophy and phenomenology in particular, but also to anyone concerned with the ideal of scientific philosophy.