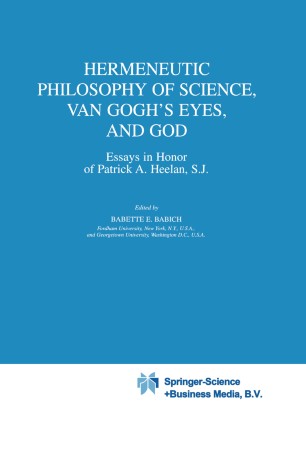 Essays in Honor of Patrick A. Heelan, S.J.

Part of the Boston Studies in the Philosophy and History of Science book series (BSPS, volume 225)

perceptual essences that can be rendered directly manifest in perception with the help of theoretically structured instruments serving as 'readable technologies'. " Scientific knowledge should thus be understood as an extension of "unassisted" perception. A perceptual fact has an outer horizon "which separates it from the ground on which it appears," and an inner horizon "composed of a multiplicity of possible perceptual profiles organized by an invariant essence. " The perceiving subject can "bring forth a representative sample of the profiles in question," occasionally by making use of certain technological processes, which are themselves subject to interpretation in terms of theoretical representations. The theoretical entities described in these representations are not "simply detected thanks to an inferential operation, but rather, they are directly perceived. " It follows from this that the correspondence between the "manifest image" and the "scientific image" is not done one-to-one, but by a "many-to-one or one-to­ many application between contextually defined perceptual objects within contexts that are mutually incompatible but complementary. " This should not, however, be understood as a form of conventionalism, nor as a form of "cultural relativism. " Pre­ comprehension, which guides interpretation imposes strict limits to the descriptive categories which can be used and to the manner in which they can be linked to appropriate empirical objects. The author applies his hermeneutic principles to the study of visual perception. (In fact this question is treated in the first part of the book.