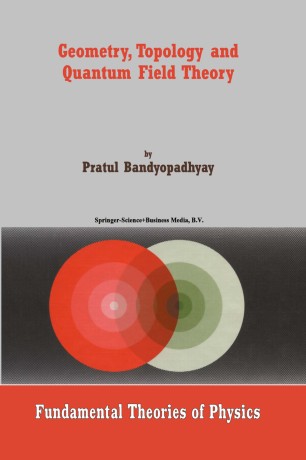 This is a monograph on geometrical and topological features which arise in quantum field theory. It is well known that when a chiral fermion interacts with a gauge field we have chiral anomaly which corresponds to the fact that divergence of the axial vector current does not vanish. It is observed that this is related to certain topological features associated with the fermion and leads to the realization of the topological origin of fermion number as well as the Berry phase. The role of gauge fields in the quantization procedure has its implications in these topological features of a fermion and helps us to consider a massive fermion as a soliton (skyrrnion). In this formalism chiral anomaly is found to be responsible for mass generation. This has its relevance in electroweak theory where it is observed that weak interaction gauge bosons attain mass topologically. The geometrical feature of a skyrmion also helps us to realize the internal symmetry of hadrons from reflection group. Finally it has been shown that noncommutative geometry where the space time manifold is taken to be X = M x Zz has its relevance in the description of a massive 4 fermion as a skyrmion when the discrete space is considered as the internal space and the symmetry breaking leads to chiral anomaly. In chap. l preliminary mathematical formulations related to the spinor structure have been discussed. In chap.