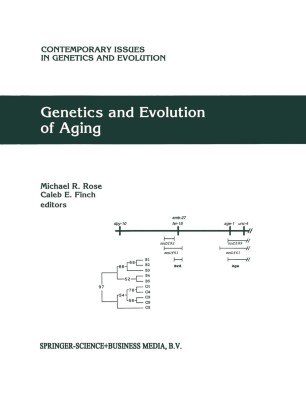 Genetics and Evolution of Aging

Part of the Contemporary Issues in Genetics and Evolution book series (CIGE, volume 3)

Aging is one of those subjects that many biologists feel is largely unknown. Therefore, they often feel comfortable offering extremely facile generalizations that are either unsupported or directly refuted in the experimental literature. Despite this unfortunate precedent, aging is a very broad phenomenon that calls out for integration beyond the mere collecting together of results from disparate laboratory organisms. With this in mind, Part One offers several different synthetic perspectives. The editors, Rose and Finch, provide a verbal synthesis of the field that deliberately attempts to look at aging from both sides, the evolutionary and the molecular. The articles by Charlesworth and Clark both provide population­ genetic perspectives on aging, the former more mathematical, the latter more experimental. Bell takes a completely different approach, arguing that aging may not be the result of evolutionary forces. Bell's model instead proposes that aging could arise from the progressive deterioration of chronic host­ pathogen interactions. This is the first detailed publication of this model. It marks something of a return to the type of aging theories that predominated in the 1950's and 1960's, theories like the somatic mutation and error catastrophe theories. We hope that the reader will be interested by the contrast in views between the articles based on evolutionary theory and that of Bell. MR. Rose and C. E. Finch (eds. ), Genetics and Evolution of Aging, 5-12, 1994. © 1994 Kluwer Academic Publishers. The J aniform genetics of aging 2 Michael R. Rosel & Caleb E.