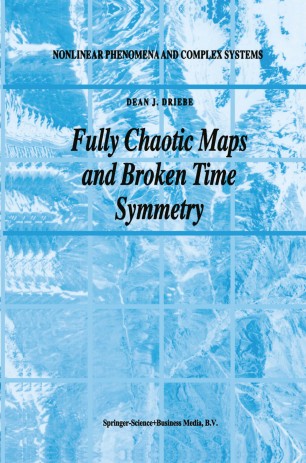 I am very pleased and privileged to write a short foreword for the monograph of Dean Driebe: Fully Chaotic Maps and Broken Time Symmetry. Despite the technical title this book deals with a problem of fundamental importance. To appreciate its meaning we have to go back to the tragic struggle that was initiated by the work of the great theoretical physicist Ludwig Boltzmann in the second half of the 19th century. Ludwig Boltzmann tried to emulate in physics what Charles Darwin had done in biology and to formulate an evolutionary approach in which past and future would play different roles. Boltzmann's work has lead to innumerable controversies as the laws of classical mechanics (as well as the laws of quan­ tum mechanics) as traditionally formulated imply symmetry between past and future. As is well known, Albert Einstein often stated that "Time is an illusion". Indeed, as long as dynamics is associated with trajectories satisfy­ ing the equations of classical mechanics, explaining irreversibility in terms of trajectories appears, as Henri Poincare concluded, as a logical error. After a long struggle, Boltzmann acknowledged his defeat and introduced a probabil­ ity description in which all microscopic states are supposed to have the same a priori probability. Irreversibility would then be due to the imperfection of our observations associated only with the "macroscopic" state described by temperature, pressure and other similar parameters. Irreversibility then appears devoid of any fundamental significance. However today this position has become untenable.