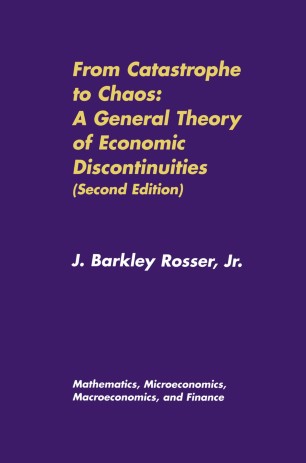 From Catastrophe to Chaos: A General Theory of Economic Discontinuities

From Catastrophe to Chaos: A General Theory of Economic Discontinuities presents and unusual perspective on economics and economic analysis. Current economic theory largely depends upon assuming that the world is fundamentally continuous. However, an increasing amount of economic research has been done using approaches that allow for discontinuities such as catastrophe theory, chaos theory, synergetics, and fractal geometry. The spread of such approaches across a variety of disciplines of thought has constituted a virtual intellectual revolution in recent years. This book reviews the applications of these approaches in various subdisciplines of economics and draws upon past economic thinkers to develop an integrated view of economics as a whole from the perspective of inherent discontinuity.

Praise for the first edition:
`What this book really amounts to is a very literate and wide-ranging survey of the chaos and catastrophe theory literature. Professor Rosser deserves great credit for drawing together an enormous number of sources(the bibliography contains about 1200 references) both inside and outside economics and in neighboring fields like ecology, history, biology, and mathematics, and weaving them into a compelling story.'
Journal of Economic Literature
`One of the greatest virtues of Rosser's book is his evenhanded presentation of models from both the mainstream neoclassicals and the alternative postmodern evolutionary economists. In fact, by discussing both research programs without denigrating either, Rosser makes a contribution unique among the books addressing these topics.'
Southern Economic Journal
'...effectively brings together a disparate and voluminous literature on a catastrophe and chaos theory to tell a compelling story about the need to comprehend economic discontinues.
This book will become a standard reference in the area that it has chosen to concentrate on and I recommend the book to readers who are interested in learning more about the intricacies of a fundamentally discontinuous world.'
American Journal of Agricultural Economics (2001)
Buy options