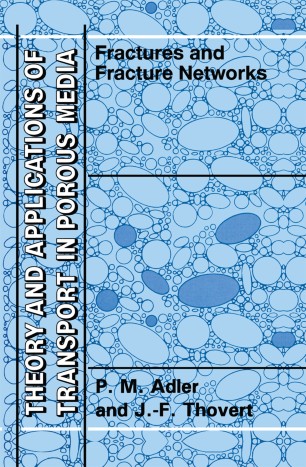 Part of the Theory and Applications of Transport in Porous Media book series (TATP, volume 15)

Both the beauty and interest of fractures and fracture networks are easy to grasp, since they are abundant in nature. An example is the road from Digne to Nice in the south of France, with an impressive number and variety of such structures: the road for the most part, goes through narrow valleys with fast running streams penetrating the rock faces; erosion is favored by the Mediterranean climate, so that rocks are barely covered by meager vegetation. In this inhospitable and sterile landscape, the visitor can im­ mediately discover innumerable fractures in great masses which have been distorted by slow, yet powerful movements. This phenomenon can be seen for about 100 kilometers; all kinds of shapes and combinations are repre­ sented and can be observed either in the mountain itself or in the man-made cliffs and excavations, resulting from improvements made to the road. In the same region, close to the Turini Pass, a real large scale hydrody­ namic experiment is taking place -a source which is situated on the flank on the mountain, has been equiped with a tap; if the tap is open, water flows through the tap only, but when it is closed, then the side of the mountain releases water in a matter of seconds. Other outlets are also influenced by this tap, such as a water basin situated a few hundred meters away.