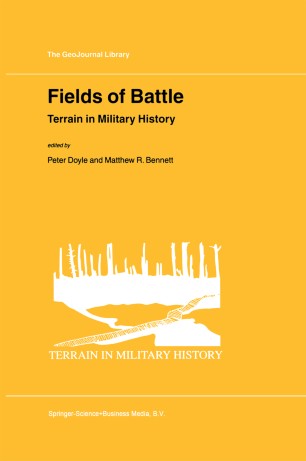 Part of the The GeoJournal Library book series (GEJL, volume 64)

Terrain has a profound effect upon the strategy and tactics of any military engagement and has consequently played an important role in determining history. In addition, the landscapes of battle, and the geology which underlies them, has helped shape the cultural iconography of battle certainly within the 20th century. In the last few years this has become a fertile topic of scientific and historical exploration and has given rise to a number of conferences and books. The current volume stems from the international Terrain in Military History conference held in association with the Imperial War Museum, London and the Royal Engineers Museum, Chatham, at the University of Greenwich in January 2000. This conference brought together historians, geologists, military enthusiasts and terrain analysts from military, academic and amateur backgrounds with the aim of exploring the application of modem tools of landscape visualisation to understanding historical battlefields. This theme was the subject of a Leverhulme Trust grant (F/345/E) awarded to the University of Greenwich and administered by us in 1998, which aimed to use the tools of modem landscape visualisation in understanding the influence of terrain in the First World War. This volume forms part of the output from this grant and is part of our wider exploration of the role of terrain in military history. Many individuals contributed to the organisation of the original conference and to the production of this volume.

"Fields of Battles is scholarly, enjoyable to read and certainly relevant for a wide range of academics and professionals. The book will be of interest to many geographers."
(The Professional Geographer June (2003)
Buy options