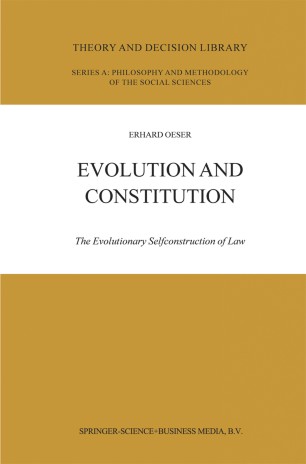 The Evolutionary Selfconstruction of Law

Evolution and Constitution for the first time brings together case law and law based on norms. It offers the reader a survey and a new explanation of evolutionary emergence of social contracts and constitutions in the European history, and -after all - should help to build a bridge between 'two cultures', science and humanities.
Evolutionary approach to law had been advocated already at the time of Darwin by English ethnologists of law like Sumner Maine and American anthropologists like Morgan. The present work is an attempt to apply evolutionary thought to the continental legal philosophy and juristic methodology. Although in the 19th century the idea of an evolution of law was present also on the continent it was burdened with reproaches of social Darwinism (proved nowadays as unreasonable). Grounds for the negotiability of evolutionary approach to complex social systems are provided by the latest research in evolutionary theory of cognition and evolutionary ethics as well as by the theory of complex systems in the sense of Friedrich von Hayek.
This book provides a profounder (conformable to the biological theory of evolution) explanatory basis not only for anthropology and history of law but also for juristic methodology. In addition it offers a practical model of juristic argumentation processes, illustrated by many examples.