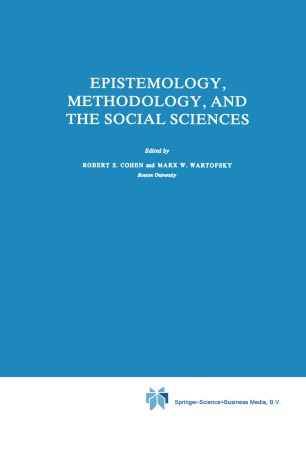 Epistemology, Methodology, and the Social Sciences

Part of the Boston Studies in the Philosophy of Science book series (BSPS, volume 71)

The last decades have seen major reformations in the philosophy and history of science. What has been called 'post-positivist' philosophy of science has introduced radically new concerns with historical, social, and valuative components of scientific thought in the natural sciences, and has raised up the demons of relativism, subjectivism and sociologism to haunt the once­ calm precincts of objectivity and realism. Though these disturbances intruded upon what had seemed to be the logically well-ordered domain of the philoso­ phy of the natural sciences, they were no news to the social sciences. There, the messy business of human action, volition, decision, the considerations of practical purposes and social values, the role of ideology and the problem of rationality, had long conspired to defeat logical-reconstructionist programs. The attempt to tarne the social sciences to the harness of a strict hypothetico­ deductive model of explanation failed. Within the social sciences, phenome­ nological, Marxist, hermeneuticist, action-theoretical approaches vied in attempting to capture the distinctiveness of human phenomena. In fact, the philosophy of the natural sciences, even in its 'hard' forms, has itself become infected with the increasing reflection upon the role of such social-scientific categories, in the attempt to understand the nature of the scientific enterprise.