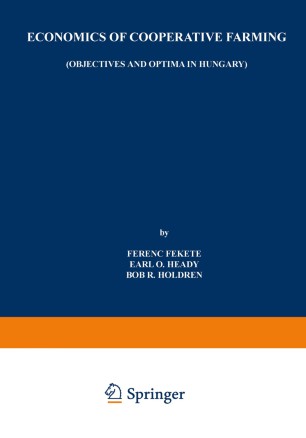 Objectives and Optima in Hungary

The present scientific and technical revolution has brought science into the range of the most effective forces of production. The formula "science= production force" applies also to the social sciences whose explorations of human relationships and drives have reached previously unsuspected depths. Objectives, such as higher living standards and full employment, economic growth and stability, social equity and security, have both called for and provided a basis for the exploitation of possibilities offered by the natural and technical sciences. In today's agriculture, age-old traditions are in the process of disintegra­ tion, but the heredity of a century (or that of even a millennium as in Hungary) does not get dissolved without defending itself. Technical progress and social restratification, the emergence of new scales of values and preferences, the adjustment of the rural communities to their new tasks and conditions - all these have transformed farm operations and farming techniques. But agriculture, even under its revolutionized surface, still hides deep, almost untouched layers. If economists and agriculturalists are perplexed by the multitude and variety of the visible farm problems, there exist many others about which they can only guess, which they must follow up. In formulating and solving these problems, agricultural economists have professional tasks: (1) facilitating the most efficient use of agricultural resources from the standpoint of the national economy, and (2) helping farmers and farm people to attain their stated, socially feasible objectives.