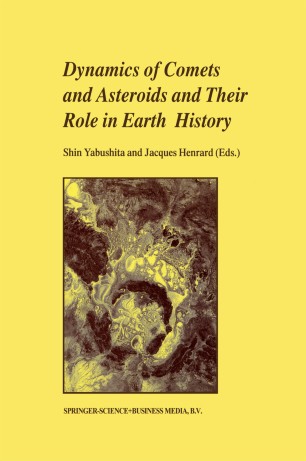 Dynamics of Comets and Asteroids and Their Role in Earth History

The last decade of this century has seen a renewed interest in the dynamics and physics of the small bodies of the Solar System, Asteroids, Comets and Meteors. New observational evidences such as the discovery of the Edgeworth-Kuiper belt, refined numerical tools such as the symplectic integrators, analytical tools such as semi-numerical perturbation algorithms and in general a better understanding of the dynamics of Hamiltonian systems, all these factors have converged to make possible and worthwhile the study, over very long time spans, of these "minor" objects. Also the public, the media and even some political assell}blies have become aware that these "minor" objects of our planetary environnement could become deadly weapons. Apparently they did have a role in Earth history and a role more ominous than "predicting" defeat (or victory, why not?) to batches of credulous rulers. Remembering what may have happened to the dinosaurs but keeping all the discretion necessary to avoid creating irrational scares, it may not be unwise or irrelevant to improve our knowledge of the physics and dynamics of these objects and to study in particular their interactions with our planet.