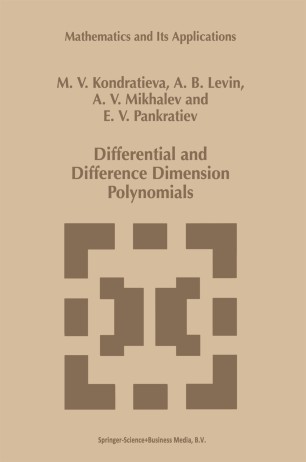 Part of the Mathematics and Its Applications book series (MAIA, volume 461)

The role of Hilbert polynomials in commutative and homological algebra as well as in algebraic geometry and combinatorics is well known. A similar role in differential algebra is played by the differential dimension polynomials. The notion of differential dimension polynomial was introduced by E. Kolchin in 1964 [KoI64]' but the problems and ideas that had led to this notion (and that are reflected in this book) have essentially more long history. Actually, one can say that the differential dimension polynomial describes in exact terms the freedom degree of a dynamic system as well as the number of arbitrary constants in the general solution of a system of algebraic differential equations. The first attempts of such description were made at the end of 19th century by Jacobi [Ja890] who estimated the number of algebraically independent constants in the general solution of a system of linear ordinary differential equations. Later on, Jacobi's results were extended to some cases of nonlinear systems, but in general case the problem of such estimation (that is known as the problem of Jacobi's bound) remains open. There are some generalization of the problem of Jacobi's bound to the partial differential equations, but the results in this area are just appearing. At the beginning of the 20th century algebraic methods in the theory of differen­ tial equations were actively developed by F. Riquier [RiqlO] and M.