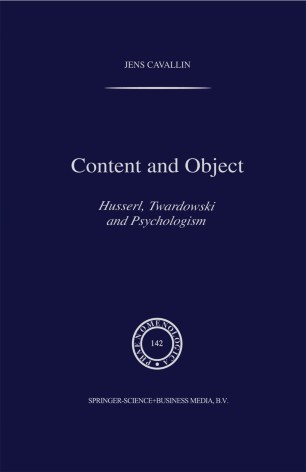 This study is a revised version ofa book, published in February 1990 under the same title, as my Ph.D. thesis at the University of Stockholm. Revision of an earlier work poses specific problems, some of which deserve mentioning. After the appearance of the first version of this book new literature on related subjects and a new version of the principal HusserI text involved in the discussion have appeared. The newer literature contains both accounts of Twardowski's thought and its relations to HusserI's philosophy, though without referring to my study from 1990, largely because the texts concerned were con­ ceived parallell to it, though published later, or independently of it. It would seem anachronistic, in this situation, to enter into new and ex­ tensive discussions with the authors of this literature. The choice made here has been to update the original study, adding references to texts published after my study, and to take account of points of views expressed. I have retained the major part of the basic information giv­ en in the 1990 version, although some of it might now be more famil­ iar to interested students than it was in 1990.