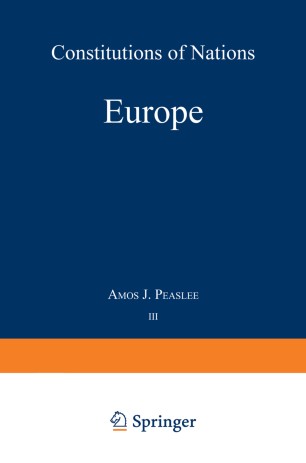 INTERNATIONAL STATUS Albania is a member of the United Nations (December 14, 1955). It is a member of other international organizations. It was a member of the League of Nations. Albania became independent on November 28, 1912, after centuries of Ottoman domination. Its existence was recognized internationally after the First Balkan War on July 28, 1913, and an international control commission drew up a constitution in 1914, providing for a monarchy with a National Assembly most of whose members were elected by the people. 4 Albania Although a neutral state, Albania became involved in the First World War, after which, in January 1920, the Albanian chiefs drew up a new constitution providing for a monarchy. In 1925, Albania was proclaimed a republic and a new constitution, based on the United States constitution, was promulgated. In 1928, the President became King and a new consti­ tution followed. On April 7, 1939, Italy occupied Albania and imposed a constitution providing that Albania was a monarchy under the House of Savoy. On April6, 1941, martial law was proclaimed throughout the country. After the Italian capitulation in 1943, Albania was occupied by Germany. The Albanian Communist Party was founded in November 1941, and the bases of the communist regime were laid at the second national confer­ ence in July 1943 of the Movement for National Liberation, created by the Party to unite and control all the forces opposing foreign occupation. This conference created Councils of National Liberation.