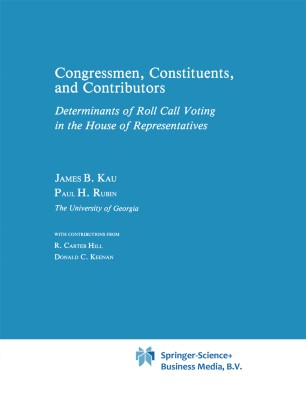 Determinants of Roll Call Voting in the House of Representatives

In a sense, this book might seem like a strange undertaking for two economists. The material seems to be much closer to political science than to economics; our topic is the determinants of congressional voting. Legislatures and roll call voting are traditionally in the domain of political science. This introduction is intended to explain why we have found this book worth writing. Today the economy functions in a regulated framework. Whether or not there ever was a "golden age" of laissez faire capitalism is an issue for historians; such an age does not now exist. One implication of the high degree of politicization of the modern economy is that one cannot any longer study economics divorced from politics. The rise to prominence of the field of public choice is one strong piece of evidence about what many economists see as the significant influence of the political sector over what would seem to be purely economic variables. A more homey example may also be used to il­ lustrate the phenomenon of increased politicization of the economy. All economists have had the experience of lecturing on the unemployment­ creating effects of a minimum wage or on the shortage-creating implications of price controls, only to have a student ask: "But if that is so, why do we have those laws?" One way of viewing this book is as an attempt to answer that question.