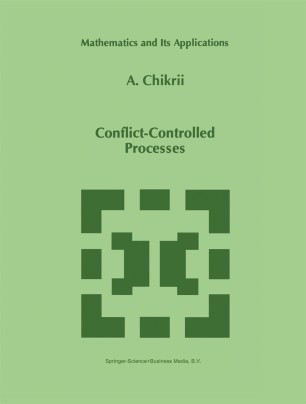 Part of the Mathematics and Its Applications book series (MAIA, volume 405)

This monograph covers one of the divisions of mathematical theory of control which examines moving objects functionating under conflict and uncertainty conditions. To identify this range of problems we use the term "conflict con­ trolled processes", coined in recent years. As the name itself does not imply the type of dynamics (difference, ordinary differential, difference-differential, integral, or partial differential equations) the differential games falI within its realms. The problems of search and tracking moving objects are also referred to the field of conflict controlled process. The contents of the monograph is confined to studying classical pursuit-evasion problems which are central to the theory of conflict controlled processes. These problems underlie the theory and are of considerable interest to researchers up to now. It should be noted that the methods of "Line of Sight", "Parallel Pursuit", "Proportional N avigation" ,"Modified Pursuit" and others have been long and well known among engineers engaged in design of rocket and space technology. An abstract theory of dynamic game problems, in its turn, is based on the methods originated by R. Isaacs, L. S. Pontryagin, and N. N. Krasovskii, and on the approaches developed around these methods. At the heart of the book is the Method of Resolving Functions which was realized within the class of quasistrategies for pursuers and then applied to the solution of the problems of "hand-to-hand", group, and succesive pursuit.