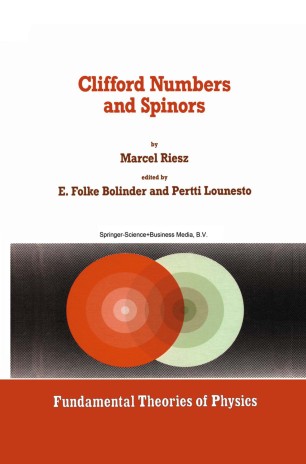 Marcellliesz's lectures delivered on October 1957 -January 1958 at the Uni­ versity of Maryland, College Park, have been previously published only infor­ mally as a manuscript entitled CLIFFORD NUMBERS AND SPINORS (Chap­ ters I - IV). As the title says, the lecture notes consist of four Chapters I, II, III and IV. However, in the preface of the lecture notes lliesz refers to Chapters V and VI which he could not finish. Chapter VI is mentioned on pages 1, 3, 16, 38 and 156, which makes it plausible that lliesz was well aware of what he was going to include in the final missing chapters. The present book makes lliesz's classic lecture notes generally available to a wider audience and tries somewhat to fill in one of the last missing chapters. This book also tries to evaluate lliesz's influence on the present research on Clifford algebras and draws special attention to lliesz's contributions in this field - often misunderstood.