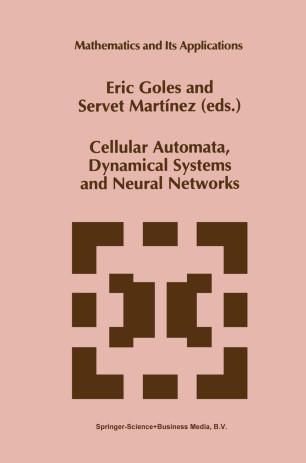 Part of the Mathematics and Its Applications book series (MAIA, volume 282)

This book contains the courses given at the Third School on Statistical Physics and Cooperative Systems held at Santiago, Chile, from 14th to 18th December 1992. The main idea of this periodic school was to bring together scientists work­ with recent trends in Statistical Physics. More precisely ing on subjects related related with non linear phenomena, dynamical systems, ergodic theory, cellular au­ tomata, symbolic dynamics, large deviation theory and neural networks. Scientists working in these subjects come from several areas: mathematics, biology, physics, computer science, electrical engineering and artificial intelligence. Recently, a very important cross-fertilization has taken place with regard to the aforesaid scientific and technological disciplines, so as to give a new approach to the research whose common core remains in statistical physics. Each contribution is devoted to one or more of the previous subjects. In most cases they are structured as surveys, presenting at the same time an original point of view about the topic and showing mostly new results. The expository text of Fran