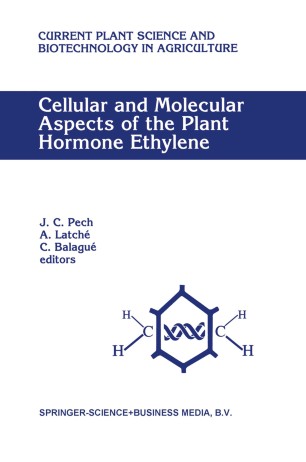 Cellular and Molecular Aspects of the Plant Hormone Ethylene

Proceedings of the International Symposium on Cellular and Molecular Aspects of Biosynthesis and Action of the Plant Hormone Ethylene, Agen, France, August 31–September 4, 1992

The International Symposium on "Cellular and Molecular Aspects of Biosynthesis and Action of the Plant Hormone Ethylenc" ,vas held in Agen, France from August 31 st and September 4th, 1992. The planning and management of the scientific and social programme of the Conference were carried out jointly by the "Ethylene Research Group" of ENSAlIN"P (Toulouse) and Agropole Congres Service (Agen). Since the last meetings in Israel (1984) and in Belgium (1988), ethylene physiology has gone through a period of exciting progress due to new developments in cellular and molecular bioiogy. New methods and tools have been developed to better understand the role and functions of ethylene in fruit ripening, flower senescence, abscission, piant growth, and cell differentiation. Genes involved in ethylene biosynthesis have been characterized and transgenic plants with altered ethylene production have been generated. The feasibility of delaying fruit ripening or flower senescence by genetic manipulation is now demonstrated, thus opening new perspectives for the postharvest handling of plant products. Some progress has also been made on the understanding of ethylene action. However, much remains to be done in this area to elucidate the ethylene signal transduction pathway. Around 140 scientists from 20 countries attended the Symposium. They presented 47 oral reports and 40 poster demonstrations. All of them are published in these proceedings. It has been a pleasure for us to organize this important Symposium and to edit this book.