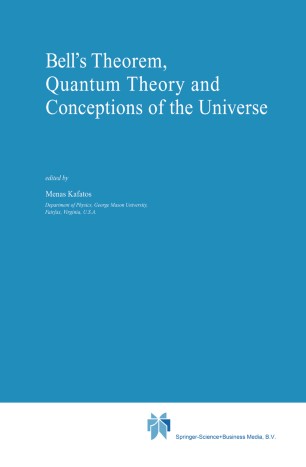 Bell’s Theorem, Quantum Theory and Conceptions of the Universe

Bell's Theorem and its associated implications for the nature of the physical world remain topics of great interest. For this reason many meetings have been recently held on the interpretation of quantum theory and the implications of Bell's Theorem. Generally these meetings have been held primarily for quantum physicists and philosophers of science who have been or are actively working on the topic. Nevertheless, other philosophers of science, mathematicians, engineers as well as members of the general public have increasingly taken interest in Bell's Theorem and its implications. The Fall Workshop held at George Mason University on October 21 and 22, 1988 and titled "Bell's Theorem, Quantum Theory and Conceptions of the Universe" was of a more general scope. Not only it attracted experts in the field, it also covered other topics such as the implications of quantum non-locality for the nature of consciousness, cosmology, the anthropic principle, etc. topics usually not covered in previous meetings of this kind. The meeting was attended by more than one hundred ten specialists and other interested people from all over the world. The purpose of the meeting was not to provide a definitive answer to the general questions raised by Bell's Theorem. It is likely that the debate will go on for quite a long time. Rather, it was meant to contribute to the important dialogue between different disciplines.