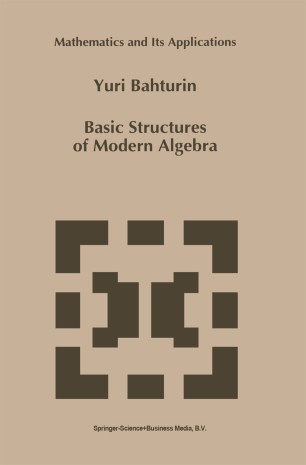 Part of the Mathematics and Its Applications book series (MAIA, volume 265)

This book has developed from a series of lectures which were given by the author in mechanics-mathematics department of the Moscow State University. In 1981 the course "Additional chapters in algebra" replaced the course "Gen­ eral algebra" which was founded by A. G. Kurosh (1908-1971), professor and head of the department of higher algebra for a period of several decades. The material of this course formed the basis of A. G. Kurosh's well-known book "Lectures on general algebra" (Moscow,1962; 2-nd edition: Moscow, Nauka, 1973) and the book "General algebra. Lectures of 1969-1970. " (Moscow, Nauka, 1974). Another book based on the course, "Elements of general al­ gebra" (M. : Nauka, 1983) was published by L. A. Skorniakov, professor, now deceased, in the same department. It should be noted that A. G. Kurosh was not only the lecturer for the course "General algebra" but he was also the recognized leader of the scientific school of the same name. It is difficult to determine the limits of this school; however, the "Lectures . . . " of 1962 men­ tioned above contain some material which exceed these limits. Eventually this effect intensified: the lectures of the course were given by many well-known scientists, and some of them see themselves as "general algebraists". Each lecturer brought significant originality not only in presentation of the material but in the substance of the course. Therefore not all material which is now accepted as necessary for algebraic students fits within the scope of general algebra.