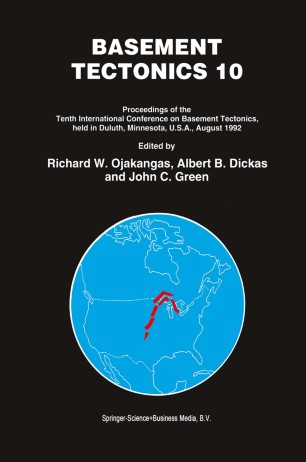 Part of the Proceedings of the International Conferences on Basement Tectonics book series (ICBT, volume 4)

The 10th International Basement Tectonics Conference was conducted on the campus of the University of Minnesota, Duluth, in Duluth, Minnesota, USA, from August I through August 11, 1992. A total of 78 individuals were in attendance, 47 of which represented the host country, with the remaining 31 traveling from 11 different foreign countries. The four days of presentations were divided into three technical sessions, namely "Shear Zones", "Basement Control On Younger Structures", and "Rifting­ Midcontinent Rift System". This tripartite conference theme was also employed in the field trip agenda with three excursions being offered, all ably organized by Field Trip Chairman John C. Green. The pre-conference trip set the stage through a two day review of the "Archean and Early Proterozoic Rocks of Northeastern Minnesota". Under beautiful summer skies, 16 sites were visited within the Vermilion district of Minnesota, considered to be the best example of an Archean greenstone belt in the United States. All registrants participated in the mid-conference trip conducted along the gabbroic and volcanic terrain of the "Midcontinent Rift, Northeastern Minnesota".