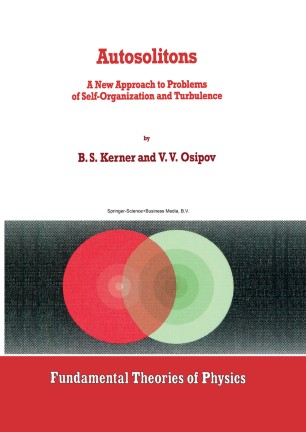 A New Approach to Problems of Self-Organization and Turbulence

This monograph is devoted to an entirely new branch of nonlinear physics - solitary intrinsic states, or autosolitons, which form in a broad class of physical, chemical and biological dissipative systems. Autosolitons are often observed as highly nonequilibrium regions in slightly nonequilibrium systems, in many ways resembling ball lightning which occurs in the atmosphere. We develop a new approach to problems of self-organization and turbulence, treating these phenomena as a result of spontaneous formation and subsequent evolution of autosolitons. Scenarios of self-organization involve sophisticated interactions between autosolitons, whereas turbulence is regarded as a pattern of autosolitons which appear and disappear at random in different parts of the system. This monograph is the first attempt to provide a comprehensive summary of the theory of autosolitons as developed by the authors over the years of research. The monograph is comprised of three more or less autonomous parts. Part I deals with the physical nature and experimental studies of autosolitons and self­ organization in various physical systems: semiconductor and gas plasma, heated gas mixture, semiconductor structures, composite superconductors, optical and magnetic media, systems with uniformly generated combustion matter, distributed gas-discharge and electronic systems. We discuss feasibility of autosolitons in the form of highly nonequilibrium regions in slightly nonequilibrium gases and semiconductors, "hot" and "cold" regions in semiconductor and gas plasmas, static, pulsating and traveling combustion fronts.