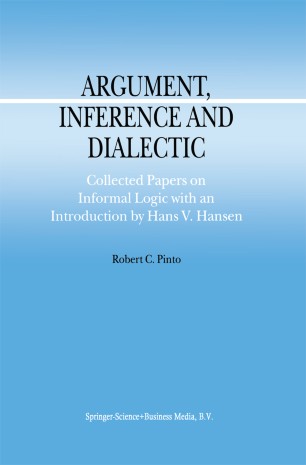 Collected Papers on Informal Logic with an Introduction by Hans V. Hansen

Chapters 1-12 of this volume contain the papers on infonnal logic and argumentation that I've published and/or read at conferences over the last 17 years. These papers are reproduced here pretty much unchanged from their first appearance; it is my intention that their appearance here constitute a record of my positions and arguments at the time of their original publication or delivery. I've made minor changes in fonnat, in the style of references, etc., for the sake of consistency; I've also corrected typographical errors and the like. The only extensive changes in wording occur in the last few pages of Chapter 7, and were made only to enable the reader to see more clearly what I was getting at in my first attempt to write about the notion of coherence. Chapter 13 was written expressly for this volume. It looks retrospectively at the contents of the first 12 chapters and attempts to highlight the unifying themes that run through them. It also revisits the ideas about dialectic that occupied my first in light of later developments in my thinking but also re­ paper, reworking them emphasizing themes about which I've tended to remain silent in the last few years.