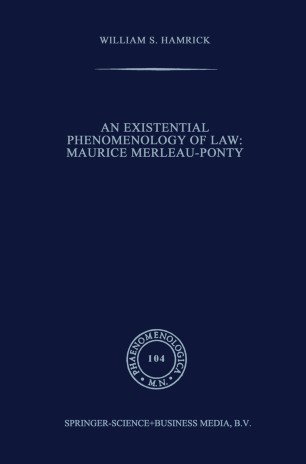 The following pages attempt to develop the main outlines of an existential phenomenology of law within the context of Maurice Merleau-Ponty's phe­ nomenology of the social world. In so doing, the essay addresses the rather narrow scholarly question, If Merleau-Ponty had written a phenomenology of law, what would it have looked like? But this scholarly enterprise, although impeccable in itself, is also transcended by a more complicated concern for a very different sort of question. Namely, if Merleau-Ponty's phenomenological descriptions of the social world are correct-as I believe they largely are-then what are the philosophical consequences for an adequate understanding of law? Such a project may well occasion a certain surprise amongst observers of the contemporary philosophical landscape, at least in what concerns the terrain of continental thought, and for two different reasons. The first is that, although interest in Merleau-Ponty's work remains strong in the· United States and Can­ ada, his philosophical standing in his own country has been largely eclipsed! by that of, first, his friend/estranged acquaintance, Jean-Paul Sartre; by various Marxist philosophies and critical social theories; and finally by those doing her­ meneutics of language. In my view, current neglect of Merleau-Ponty's thought in France is most regrettable.